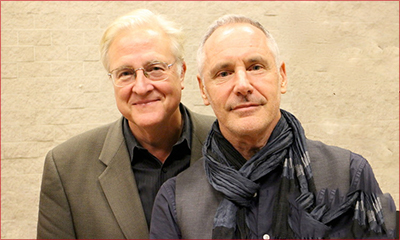 Pulitzer Prize-winner Paul Moravec is a critically acclaimed composer whose music has been described as “masterful” (Opera News), “electrifying” (Classical MPR), “wonderfully energetic” (San Francisco Chronicle), “virtuosic” (The Wall Street Journal), and “astonishing” (Gramophone). His extensive catalog features over 100 genre-ranging works including: opera; orchestra; band; chamber; choral; instrumental; film, and electro-acoustic compositions. Moravec has served as Composer-in-Residence at the American Academy in Rome and Artist-in-Residence at the Institute for Advanced Study (Princeton, NJ), and received honors from the Guggenheim Foundation, the American Academy of Arts and Letters, National Endowment for the Arts, and the Rockefeller Foundation. A graduate of Harvard College and Columbia University, he currently holds the position of University Professor at Adelphi University, and is an elected member of the American Philosophical Society.

The Shining, Moravec’s fourth opera, premiered in May 2016 to sold-out audiences at the Minnesota Opera, and was presented as part of the company’s New Works Initiative. The composer’s previous operas include: The Letter (after Somerset Maugham’s noted 1927 play) which was commissioned by the Santa Fe Opera; and two one-act chamber operas written with collaborator/ librettist Terry Teachout - Danse Russe based after Stravinsky’s groundbreaking work The Rite of Spring, and The King’s Man, a historic, Revolutionary war drama about the familial relationship between founding father Benjamin Franklin and his Tory-supporting son William Franklin. For more information about Paul Moravec, visit www.paulmoravec.com or www.subitomusic.com.

"The Shining, by Paul Moravec and Mark Campbell, a well-made, entertaining piece…elevates the tale from horror story to a human drama."
— The Wall Street Journal

With over 15 librettos to his credit, Mark Campbell is one of the most in-demand and prolific librettists worldwide, and has been profiled in Opera News as "poised...to become a major force in opera in the coming decade..." Campbell’s most recent theatrical success is The Shining, written in collaboration with composer Paul Moravec. Commissioned by the Minnesota Opera, the opera is directly based on Stephen King’s 1977 best-selling novel. The Shining premiered in spring 2016 to sold-out audiences and sweeping critical acclaim.

"Moravec and Campbell have created a genuinely fantastic retelling of The Shining [and a] thrilling addition to the modern opera repertoire."
— L’Etoile