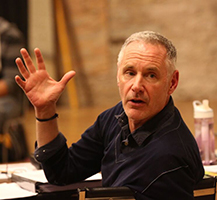 Turning Stephen King’s novel The Shining into an opera was the idea of stage director Eric Simonson and Minnesota Opera Artistic Director Dale Johnson. When they approached me to adapt the work into the libretto for an opera, I had only seen the Kubrick movie and was very apprehensive about taking on the commission. How could an opera make an audience forget about that iconic movie? And what in the movie is “operatic;” what characters undergo the kind of transformation music demands?

Fortunately, these fears were overruled by the dream prospect of collaborating with Paul Moravec and working again with Eric and Dale and Minnesota Opera (my fourth opera with the company). And once I started reading Mr. King’s novel, those fears were mostly dispelled; the novel indeed has all the makings of a great opera.

"Librettist Mark Campbell is sparse but effective with [The Shining’s] words, clever, and generous...[The libretto is] right on target, alternately tense and surprisingly funny…The composer and librettist give the performers notes they can sing and act…"
— Denver Post

My process began by identifying what events in the story were crucial, what were stage-worthy and what would keep the story’s propulsion going. I condensed the novel’s time period of many months into several weeks in the libretto, with Act II occurring in a 24-hour period. I placed the bulk of the story in one setting: the Overlook Hotel. I forced all of the story’s events into a collision in the Act I finale—including the physical entrance of the hotel’s ghosts. I also introduced staged orchestral interludes into Act I to show time passing. It all somehow just came together. 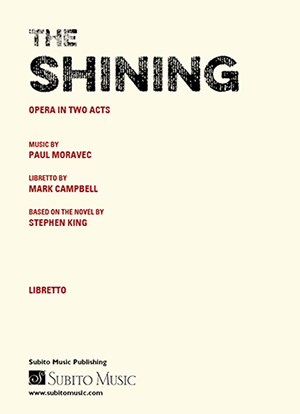 I’m happy to report that the opera was a hit with audience and critics alike—and is widely considered to be one of the most successful stage adaptations of Mr. King’s works to date. Of course, I share this success with Paul, Dale and Minnesota Opera, maestro Michael Christie, and everyone associated with Eric Simonson’s brilliant production.

A good libretto is all about the architecture of events and the use of simple language. In adapting Stephen King's novel, I began by identifying stage-worthy events that were necessary to propel and build—and not impede--the narrative. Once the outline was locked into place, I created text that would inspire Paul and allow him to expand the emotions of characters through music. I believe that our combined forces created a work that is very true to the heart of Mr. King's novel, but also makes full use of the musical form to drive the novel into places only opera can go.